…We’re all born with these essential three tools for user research.

The proportions are about right too. …until your eyes get busy looking at the notes you’re taking rather than observing behaviours and maintaining eye contact during the interview.

If you’re a solo researcher, electronic eyes and ears are useful too, but it’s a depressing reality that from one hour of interview footage there may only be a few minutes from the recording that are used to frame your insights later.

When you’re listening, thinking to yourself “this stuff she’s saying is total gold” the best case scenario is to be able to quickly find those nuggets when you’re back in the office… which is entirely possible if you take notes like this: 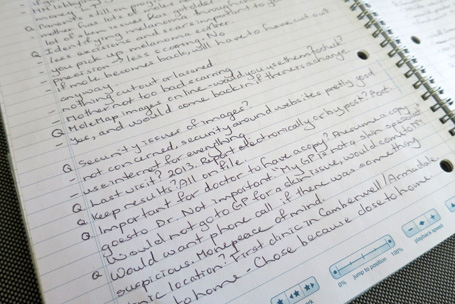 If you’re taking notes like this AND trying to interview someone… you’re missing the point.

Capturing verbatim notes comes at the cost of having an only halfway natural conversation. This is why despite experimenting with many approaches and technologies, I keep coming back to using a smarten to take notes during fieldwork, or even usability testing products.

A smartpen lets me focus on the conversation, then just nip back to highlighted moments later. It records audio as you scribble, synchronising the audio to the marks you make on the page.

This frees my eyes to pick up on body language, expressions and mannerisms, and think about where the conversation is going … meanwhile, I’m highlighting key moments in the conversation, for quick and easy recall after the session. Having the exact wording wrapped in the tone of voice from the moment, at the tap of the pen is simply brilliant.

Knowing you’ve got full ‘recall’ from the pen means you can take notes as detailed or skimpy as you like, so over time I’ve adjusted my notes to the bare minimum. Most of what I write is written without looking at the page, except for a quick initial glance, so I’ve adopted a ‘shorthand’ note-taking format of keywords and symbols: 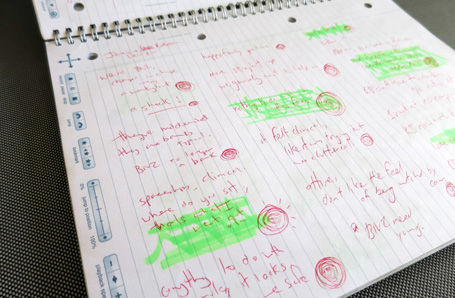 I scribble squiggly circles next to key words according to the ‘weight’ of the moment, in the moment. More circles means more emotion / intensity etc.

I might write down a short quote if I can do so without any interruption to the flow, but I’m much more likely to jot down a keyword or phrase as the person is talking, holding their gaze while drawing a star or squiggle etc. 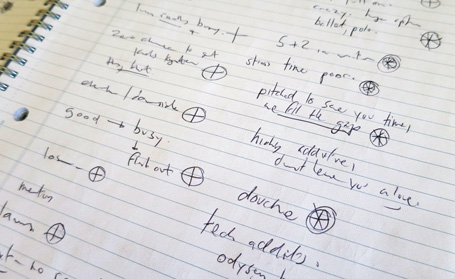 These marks are my visual shortcuts to audio moments

In an ideal world I don’t take notes at all. I film the whole session and transcribe it while reviewing the video footage.

This allows total focus during the interview and is a great way to re-immerse in the moment, but it can be a painful trawl through the footage to pin-point those moments or killer quotes for an edited video.

So my new default is to get the smarten AND the video camera rolling at the same time.

As I’m going back to ‘tap and play’ my notes, I can read the time code from the little screen on the pen. Having this time code makes a total doddle out of pulling together a ‘highlights’ clip from acres of footage. 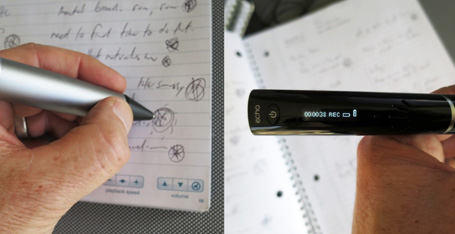 Tap – and Boom! you’re back in the moment to the nearest second.

Best of all – knowing all the goodness is being captured and I can cherry-pick the best bits later means I’m able to relax during the interview and build real rapport with the person, and frees up my eyes to do their job.

At the end of an hour of interviewing, I might have 2 or max 3 sides of pretty scrawly notes on an A4 pad with a couple of dozen scribbly dots of different sizes, some underlined words, maybe some little sketches or doodles .. and it’s all time linked to audio.

Nobody could understand the notes but me… but it just so so rich with the audio accompaniment.

Weeks later you can go back and re-listen to a particular utterance at the drop-of-a-hat. Tap, listen, bingo…

I’m obviously sold on this, but would really love to hear…

How do you handle the dual task of note taking and interviewing when flying solo during in-home customer experience research?

Meanwhile, I’ve got my Two, Two and One… plus the smartpen.

The one I use is called a Livescribe , and in the 5 years I’ve been using them they’ve developed a raft of additional functionality, but I literally only use the pen to record and playback, but if anyone’s found a reason to use the extra wifi whizz-bang, I’m all ears.